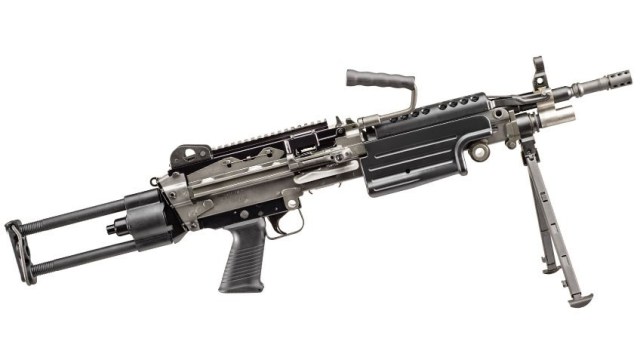 FN America, LLC, announces today the mandatory recall of certain FN M249S semi-automatic, belt-fed rifles in both standard and PARA configurations. A recently identified design issue within the hammer group of the rifle may adversely affect the rifle’s reliability. Under certain circumstances, a reset failure within the hammer group may cause the M249S to cease to function, causing an unsafe firing event. To correct this condition and restore consistent, proper and safe operation of the firearm, it is necessary to replace the hammer group.

FN is instructing customers to discontinue use of these rifles immediately and return affected products to FN directly for installation of a new hammer group, at no cost.

Not all FN M249S serial numbers are affected by this recall. Therefore, FN M249S owners are asked to please visit the FN M249S Safety Recall webpage and input their serial number. If the firearm is affected, further instruction on returning the FN M249S for service will be provided.

Note: Please do not ship any affected product to FN until a FedEx label has been generated and sent. If the firearm is not affected, a message stating such will be displayed. In the interim, FN asks that customers not operate their FN M249S standard or PARA until the hammer group has been replaced.

FN is deeply committed to providing customers with the safest, most reliable firearms possible. As such, it is imperative that all recalled product is received back as soon as possible. Patience and cooperation is appreciated as we receive, inspect and service these firearms. We will make every effort to return the product back to customers within 30 days of receipt.

For questions about the recall or assistance in returning a firearm, contact the FN M249S Recall Support team at 1-800-635-1321, extension 145, or by email at M249Srecall@fnamerica.com. Hours of operation are 10 a.m. to 4 p.m. Eastern time, Monday through Friday.

As CZ puts it, their Scorpion EVO 3 S1 Carbine is a “whole new animal.”  With an enormous variety of semi-automatic AR-15 style firearms in rifle and pistol calibers on the market, the Scorpion surely stands out.  I decided to get a better idea of what its sting felt like.

CZ, or Ceska zbrojovka Uhersky Brod, originated in Czechoslovakia in 1936.  The newer CZ-USA arm of the company was formed in 1997, acquiring the renowned Dan Wesson firearms in early 2005.  The CZ-USA headquarters are currently located in Kansas City, KS, while the parent company remains in what is now the Czech Republic.

A primitive variation of the scorpion was the vz. 61 Skorpion, which was designed and manufactured in the early 1960s.  This machine pistol was chambered in .32 ACP, among other small cartridges.  A semi-automatic civilian model was later created, but discontinued in 2010.

CZ introduced the first in a newer line of Scorpion models as a submachine gun in 2009.  Following its success and adoption by security and military forces worldwide, CZ released a semi-automatic pistol version in 2015, built off of the same platform.  The pistol is now in its second iteration, with the latest offer including a longer forend with room for most suppressors. Subsequent to the pistol, CZ released the semi-automatic carbine version of the Scorpion in mid-2016.  It is available with either a compensating muzzle brake or faux suppressor specially built by SilencerCo.

Like many submachine gun and pistol variations, the Scorpion Carbine is blowback-operated and chambered in 9mm Luger.  The carbine has a sufficient number of US-made parts to make it 922(r) compliant.

At the rear, the Scorpion has a folding, adjustable stock.  It also has a 16.2 inch hammer-forged barrel topped by a ½ x 28 threaded muzzle (plus muzzle brake or faux suppressor).  The forend has several M-LOK attachment points and there are two sling attachment points on each side, plus a ¾ inch sling slot on the left.  At the top resides a generous Picatinny rail, along with low-profile aluminum adjustable sights, with the rear sight having four different apertures.

The Scorpion offers ambidextrous controls, including the swappable, non-reciprocating side-charging handle.  Even the trigger reach can be adjusted.  Research indicates that the trigger pull is around nine pounds, but one of many after-market accessories can reduce this to somewhere in the range of six pounds.

The Scorpion I purchased came with a single 10-round double stack magazine, but additional magazines are available that hold 20 or even 30 rounds, where permitted by law.  Replacement magazines are incredibly affordable, with each being $20 or less on CZ’s webstore.

The frame and magazines are both made of polymer, the former being certainly noticeable when handling the carbine.  The faux suppressor model weighs in at seven pounds, while the muzzle brake version comes in at 6.38 pounds.

The MSRP for the Scorpion ranges from $999 to $1,040 for the muzzle brake and the faux suppressor models, respectively.

Since purchasing the Scorpion with the muzzle brake, I have fired over 200 rounds with a variety of target ammunition and have not experienced a single malfunction.  This ammunition included Federal, Winchester White Box, Winchester Forged (steel cased) and also at least 50 reloaded cartridges.

The side-charging handle was a big draw, and it has not disappointed.  This can be slapped MP5-style to close the bolt, or there is a separate bolt release.  The handle itself is a bit on the small side, likely to keep the profile slim. If desired, there are aftermarket replacements available which allow for a size increase.Overall, the Scorpion was easy to shoot with very little recoil, and it was also very comfortable to handle, not to mention fun.  The controls are certainly different than the AR platform, but they are very easy to adapt to.

The ambidextrous safety switch has occasionally pinched my right hand when shooting.  However, I mostly view the switch as advantageous, as it is sometimes easier to reach with my index finger than the one on the left side is with my thumb.  Fortunately, CZ has an inexpensive part referred to as a “safety delete”, which will replace the switch with a flat circular piece of plastic.

With the aluminum sights, I was able to shoot some tight groups at 25 and 50 yards, and even made a few shots out to 100 yards.  The four rear aperture options were much appreciated when changing distances.

Disassembly of the Scorpion is quite simple.  All one has to do is remove a single pin and pull out the trigger pack.  The bolt/slide assembly comes out fairly easily from there.

The only other slightly unfavorable experience I have had with the Scorpion has been upon insertion and removal of the magazines, but this problem has not been persistent.  Occasionally, when inserting the magazine, it would not fully catch.  It would either have to be inserted again, or the release pulled outward slightly for it to seat properly.  Upon attempted release, the magazine sometimes did not drop freely and I would need to remove it manually.

A call was placed to CZ-USA to inquire about a potential easy fix or to perhaps identify if there was an oversight in manipulation.  The Customer Service department proved superior, as the call was answered within moments.  The initial representative was unable to resolve the inquiry, but the call was immediately transferred to a warranty gunsmith, who indicated it was a novel complaint.  The gunsmith suggested mailing the item back for further investigation, but as the glitch isn’t too bothersome, I opted not to.

I currently own both an AR platform carbine as well as the Scorpion. After purchase of the latter, I assumed I would eventually decide to sell one. Thus far, however, this has not been the case.  Each has a unique feel and it is enjoyable to have the ability to practice with 9mm ammunition, switching to .223 or 5.56 for some extra punch and distance.  I currently plan to continue use of the Scorpion primarily at the range, but can easily see this reliable firearm being used for home defense.  It doesn’t hurt that it is incredibly fun for plinking as well. 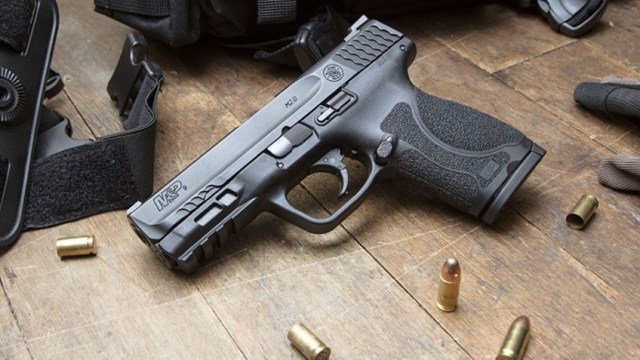 Move over Glock 19. Move over Glock 23. Less than a year after the release of its M&P M2.0 pistol, Smith & Wesson Corp. has grown the family by adding the M&P M2.0 Compact pistol series. Available in 9 mm and .40 S&W, the series builds upon the popular platform in a versatile, carry-size configuration, and is designed for both personal and professional use.

President and CEO of American Outdoor Brands Corporation James Debney said, “When we introduced the M&P M2.0 pistol family back in January, we announced our plans to expand the next-generation M2.0 product platform beyond the full-size design.” He said the M&P M2.0 pistols represent a growing family of products developed through feedback from Smith & Wesson’s professional and civilian customers to deliver the performance and features they desire.

The compact pistol series features a 15- or 13-round capacity (depending on caliber), and a 4” barrel, blending a feature set that offers both shootability and concealment. “The M&P M2.0 Compact pistol series bridges the gap for those who want a single firearm for professional use, personal protection, carry, or practice at the range,” said Debney. “We believe the new M&P M2.0 Compact series will be sought after by consumers whose purchase option in this category has, until now, been limited primarily to the Glock 19 or 23.”